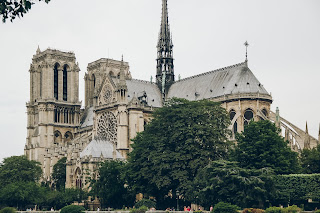 I was on an airliner flying from Minneapolis to Nashville when the reports of the fire at Notre Dame reached me.  We were boarding.  When we landed two hours later in Nashville, the blaze was still going.  Notre-Dame de Paris, "Our Lady of Paris," is an 850 year-old cathedral in Paris.  Priceless art treasures are housed there.  The building itself is a priceless art treasure.  They even manage to have church services at Notre Dame.  Wonderful, since a cathedral is a church building.

The news reports and the postings on social media intrigued me.  If the news reports are accurate, firefighters were hampered in the initial response because of the spectators crying.  Perhaps they were crying for the artwork.  The social media response by U.S. Americans was interesting.  In may instances the response has been...emotional.  Perhaps they grieve for Paris that a great tourist attraction has been damaged and the restoration will take years, perhaps decades.  Given the architecture, the craftsmanship of centuries past, the price tag will be...well, inconceivable.  It has been a little over 24 hours since the catastrophe and the promised donations near three quarters of a billion dollars.  Likely the tip of the iceberg for a church building/art treasure/tourist attraction 850 years old.  By the way, it is so large it occupies an island, the Île de la Cité in the 4th arrondissement of Paris, France.  Perhaps they are funding an icon of French culture.  The vast majority of funds are promised by French billionaires.

To me, the fire, and the responses, serve as a sort of commentary - a stark contrast to Western Christianity.  The destruction of church buildings is nothing new.  Just check with any congregation suffering such destruction after fire, tornado, hurricane, flood or any such catastrophe.  For that matter, catastrophe is nothing new to Notre Dame.  She managed to survive wars, a number of them, in her centuries of existence.  In the 16th century she was ravaged by warring factions.  One led by the French king.  Ironically, the motivation for the vandalism was based on religion.  They felt the lady had lost her first love.  Herein lies the commentary of contrast.  The response has been powerful, visceral and passionate.  It as if countless millions in western culture have lost something deeply personal.  My first observation here - ancient yes, but this is nothing more than a church building, made up of stone, mortar and timber.  Okay, okay, the timbers burned up.  But then, for those that believe - everything material will one day burn up.  It may be a bummer, but one day you really have to let go of that '64 1/2 Mustang convertible.  Still, so many act as if they are deeply invested in the church building of Notre Dame.  Interesting, considering only five percent of the French population is in a church building - any church building in France - on a regular basis.  Significant compared to the 46% who claim to be Christian.  Perhaps that is due to the decline of Christianity in France.  Just 30 years ago 86% claimed to be Christian.  That, by any standard, is significant.  Perhaps, as Americans we can shake our heads and decry the slide in Christian culture.  No.  We would be hypocritical to do so.  The numbers are not much better for us.  If anything, studies show they are what we will be in 20-30 years.  You see, only 17.7 % of U.S. American Christians are in church on a regular basis.  Oh, and to be counted regular means once every eight weeks.

So, why the concern for a building which will one day burn up?  I should add here - I am not heartless, it pains me to see the loss.  However, though Notre Dame is in truth a grand lady, she is not the Church.  No, that Lady is made of living stones, and if Jesus is to be believed (you better - eternity rests on His promise), then His Bride, His Church will endure for eternity.  That does not mean she cannot be harmed.  Notre Dame suffered from fire - too much of it.  Christ's church can suffer too.  From fire.  Too little of it.  She can, and Christ Himself charged that she can drift from her first love.  The great tragedy of Notre Dame was not the fire which consumed her spire, but the lack of fire filling her pews.